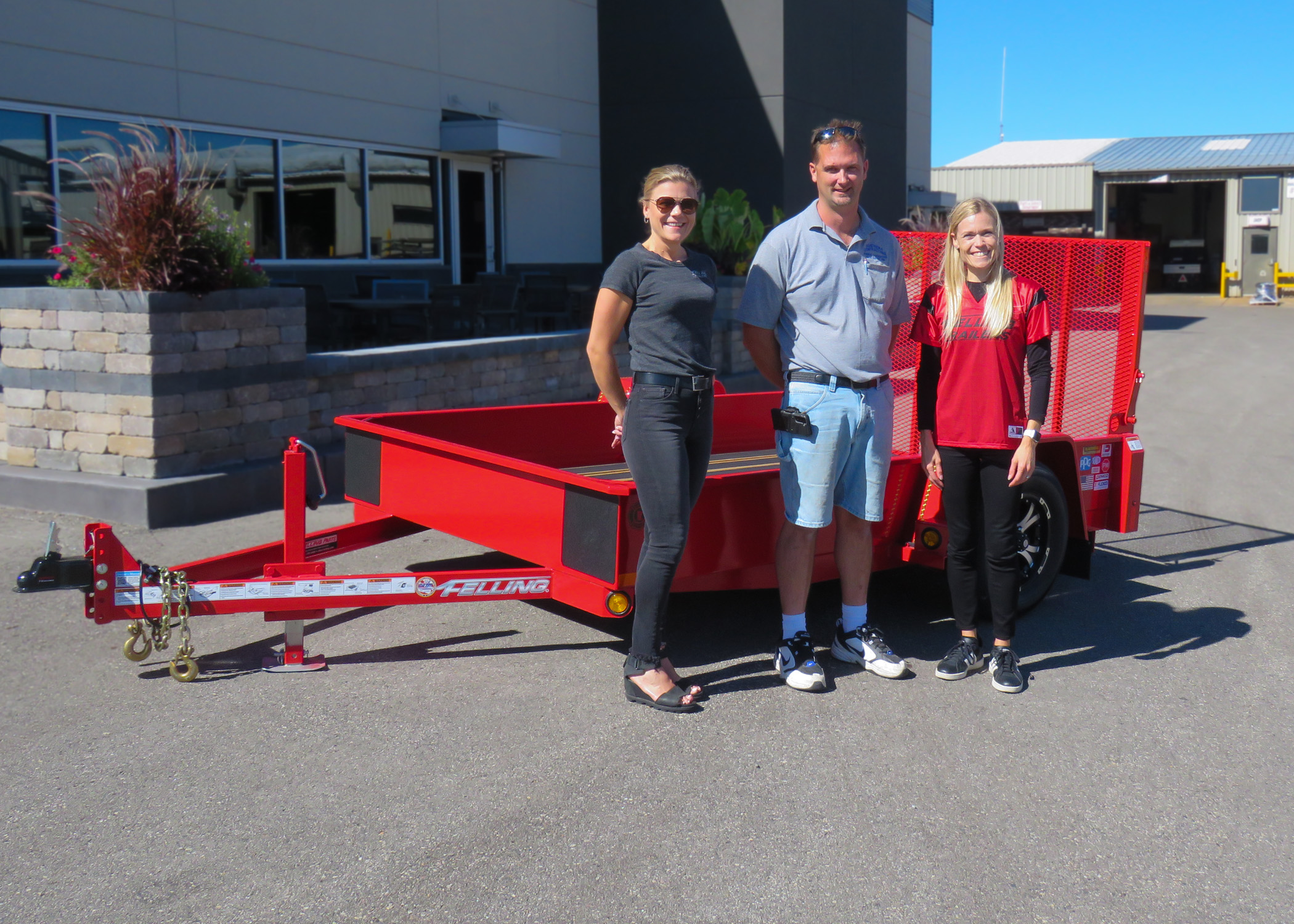 Joe, a local contractor, has participated in previous Trailer for a Cause auctions but never pushed for the winning bid.

“This year it just made a little more sense for a few reasons. One reason was for business needs," explained Kestreba. "I needed to replace my aging current FT-3 (2000 model year). The second was for personal reasons. When I was about five years old, my neighbor Dave Kane, a volunteer firefighter, was killed in the Arc fire (Noah's Arc Restaurant in Sauk Centre, now Diamond Point). I was young, but I still remember the day like it was yesterday, as the procession of cars showed up at the neighbor’s home to notify the family of the tragic accident of Kane and Zabel,” said Joe. David Kane and Doug Zabel, both volunteer firefighters for the Sauk Centre Fire Department, passed away when the structure they were standing on collapsed under the heat and stress of a raging fire, January 7th, 1985. "The MN firefighters risk their lives every day to try and help everyone they can save, whether it's fires or accidents they are called to. My wife (Blaine) was an EMT in Sauk for many years and worked alongside many firefighters."

Joe watched as the auction started on September 5 and was one of the first bidders to jump in on the bidding action. Over the next 7-days, the bidding action continued with 21 bids placed throughout the auction. Joe and his daughter (Taylor) watched together as the minutes counted down to the end of the auction. "With approximately 7 minutes left in the auction, we watched the bid price not moving. We decided with a few seconds left to see if we could win the auction. With 5 seconds left, we entered our bid (the winning bid), only to have the confirmation screen pop-up with about 2 seconds left, prompting us to hit enter again. We were both very surprised that we won and congratulated each other with a high-five,” said Joe.

Joe will be putting the FT-3 trailer to use hauling materials and equipment to and from job sites when needed. About three years ago, he bought the family business, Kostreba Contracting, from his family due to his father becoming ill and not being able to continue operating the business. "I had worked alongside my dad building the business since I was 14-years old. Twenty-seven years later, I'm still doing the same thing I grew up doing, helping families in Sauk Centre and the surrounding communities building new homes, remodeling projects, and anything they may need to be done. The trailer is going to be very well taken care of, almost too nice to use,” said Joe. “The city of Sauk Centre has been a very great place to work and raise our family and operate our family-owned business with my wife Blaine and daughter Taylor.”

The 2021 Trailer for a Cause FT-3 utility trailer was painted the signature fire engine red with custom fire engine gold pinstriping and bared the Minnesota Fire Fighters Foundation emblem. Several Felling Trailers' suppliers joined to support the MNFFF through sponsorship of the trailer build, from lighting to tires and paint. The 2021 Trailer for a Cause sponsors were Trans-Texas, PPG, Dexter, Sealco, Peterson, Industrial Wood, Demco, Pacific Rim, and Metal Crafters/Flexco. Felling Trailers wanted to generate awareness about the hidden health dangers and cancer risks firefighters face while serving and beyond.  The auction ran for seven days, from Sunday, Sept. 5th, at noon CST through Saturday, Sept. 11th (National Day of Service & Remembrance), at 7 pm CST ending with Kostreba’s winning bid of $4,850.99. One hundred percent of the $4,850.99 will benefit the Minnesota Fire Fighters Foundation!

About the Minnesota Firefighters Foundation

After receiving training on the Health Risk to Firefighters in 2016, a small group of individuals felt compelled to do more for their brothers and sisters in the fire service. The founding five members piled into a small room and knew at that time there needed to be more focus on the hidden health and cancer risk firefighters faced. In early 2017 The Minnesota Firefighters Foundation was formed, and its mission is simple. Supporting firefighters and their families that have been affected by cancer and other health issues due to their involvement in the fire service. MNFFF’s primary campaign is HOODS 4 HEROES, which educates firefighters on how to protect themselves, along with giving them the tools and equipment to help mitigate the risk of cancer and other hidden health risks. The HOODS 4 HEROES campaign mission is to purchase particulate hoods for fire departments across Minnesota that cannot afford them.  For additional information on MNFFs research, education, and services, visit www.mnfff.org.

Felling Trailers is a family-owned and operated Full Line Trailer Manufacturer located in Central Minnesota. Started in 1974, Felling Trailers, Inc. has grown from a small shop to a factory and office complex that today covers over 325,000 square feet. Felling’s pride and differentiation is its customized trailer division. Its engineers utilize the latest Industry-leading design techniques, and its experienced metal craftspeople use cutting-edge technology to turn its customers' conceptual trailer needs into a tangible product. Felling has been providing innovative trailer solutions to the transportation industry for over 45 years. Felling Trailers' current capabilities allow them to provide a high-quality product that is distributed across North America and internationally.  Felling Trailers, Inc. is an ISO 9001 Quality Management System Certified company, WBENC-Certified WBE company, and an Equal Opportunity Employer.