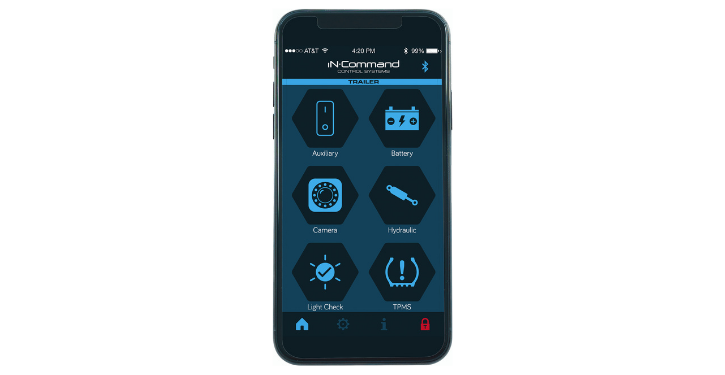 The system had given trailer owners control of primary functions of their trailer using their Bluetooth-enabled smartphone and eliminated the need for wired remotes and key fobs. The iN∙Command Trailer app controlled hydraulic lifts, latched auxiliary functions, monitored battery levels, and performed light checks. iN∙Command also featured Travel Lock Out technology, which required two-stage confirmation to operate functions while trailers are in motion and was designed to prevent accidental operation. ASA Electronics had taken the smart DNA of the original iN∙Command Control Systems for the RV industry and combined it with the heavy duty techniques it's mastered in decades of experience in the commercial vehicle and construction markets.

The redesigned Body Control Module was built to withstand the elements as well as simplify the Bluetooth pairing process with a single button interface, which allowed trailer operators to pair their phones quickly on the job site. The iN∙Command Trailer app also supported the iN∙Command Tire Pressure Monitoring System.

ASA Electronics is revolutionizing the professional-grade trailer with iN•Command Control Systems for Trailers. This first-of-its-kind system lets trailer operators control key functions of the trailer wirelessly from their smartphone. ASA Electronics has taken the smart DNA of the original iN•Command Control Systems for the RV industry and combined it with the heavy-duty techniques it's mastered over decades of experience in the commercial vehicle and construction markets.