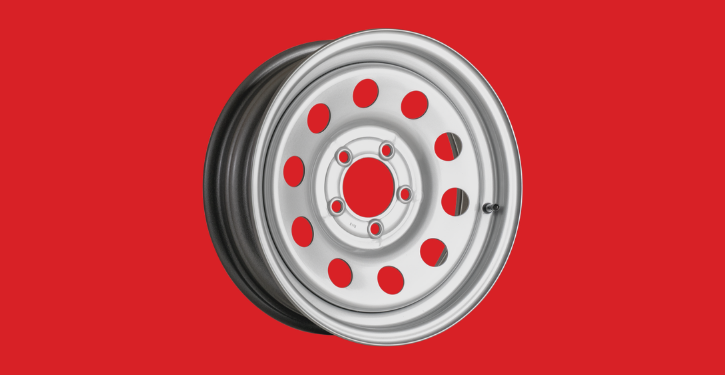 Just over 15 months ago, Taskmaster Components began working with the world’s largest wheel manufacturer, Maxion Wheels, to develop a high-quality steel wheel lineup. This steel wheel series, Vesper, has now become available and ready to ship. After recent trade rulings and the ongoing global pandemic having caused steel wheel shortages, this new line was set to fill a large void in the North American market.

Taskmaster Components envisioned a steel wheel with tangible improvements over standard steel trailer wheels, and the Engineering team at Maxion Wheels made this vision a reality. The steel wheel market had become commodified to the point that product quality was often secondary to price. The company was proud to have introduced the Vesper, which was priced competitively and cut no corners in terms of quality.

In the past, when Taskmaster Components introduced a new product line, their executive team had traveled to the factory to watch the first product roll off of the assembly line, but that wasn’t possible this time. In place of a factory visit, Maxion Wheels sent two of their team leaders from Brazil and Detroit to inspect the first containers that arrived at Taskmaster’s Iowa warehouse.

"It was amazing to partner with a company that was as excited to introduce a new product as we were. Their team being here in person to see the culmination of a lot of hard work meant a great deal to us,” said Kelly Still, VP of Operations. The Vesper lineup was constructed entirely of a high-grade steel usually reserved for just the discs in other wheels, equating to a longer wheel life. Advanced engineering optimization removed an estimated 5-10% of weight, resulting in improved fuel economy. The entire wheel lineup also received automotive-grade rim edge conditioning, which lessened tire damage during mounting and eliminated stress cracks around the rim. The Vesper series was finished in a high-quality coating that exceeded 1,000 hours in the salt spray chamber.

The Vesper lineup included 15" and 16" spoke and modular designs, 16" dual, and 22.5" HD, with the option of black, silver, or white high-quality finishes. For more information on the Vesper series or any additional Taskmaster Components’ products, please call 800-289-8667 or visit www.taskmasterproducts.com.

Trans Texas Tire was formed in Texas in 1985 and began doing business as Taskmaster Components in 2003. Its primary market is tires, wheels and tire & wheel assemblies for utility trailers, recreation vehicles, livestock trailers, over-the-road dry van trailers, and mobile homes. Its mission is to deliver cosmetically and structurally perfect tire & wheel assemblies to manufacturers while utilizing the just in time (JIT) method. Taskmaster Components was an early adopter of sourcing tires and wheels independently on a global scale. With company owned warehouses in Texas, Missouri, Iowa and Georgia, and cross docks in California and Indiana, it's able to reach your needs whether you are a trailer manufacturer or an independent retail tire chain. Taskmaster Components is committed to exceed service and supply chain expectations in the OEM towable industry worldwide.